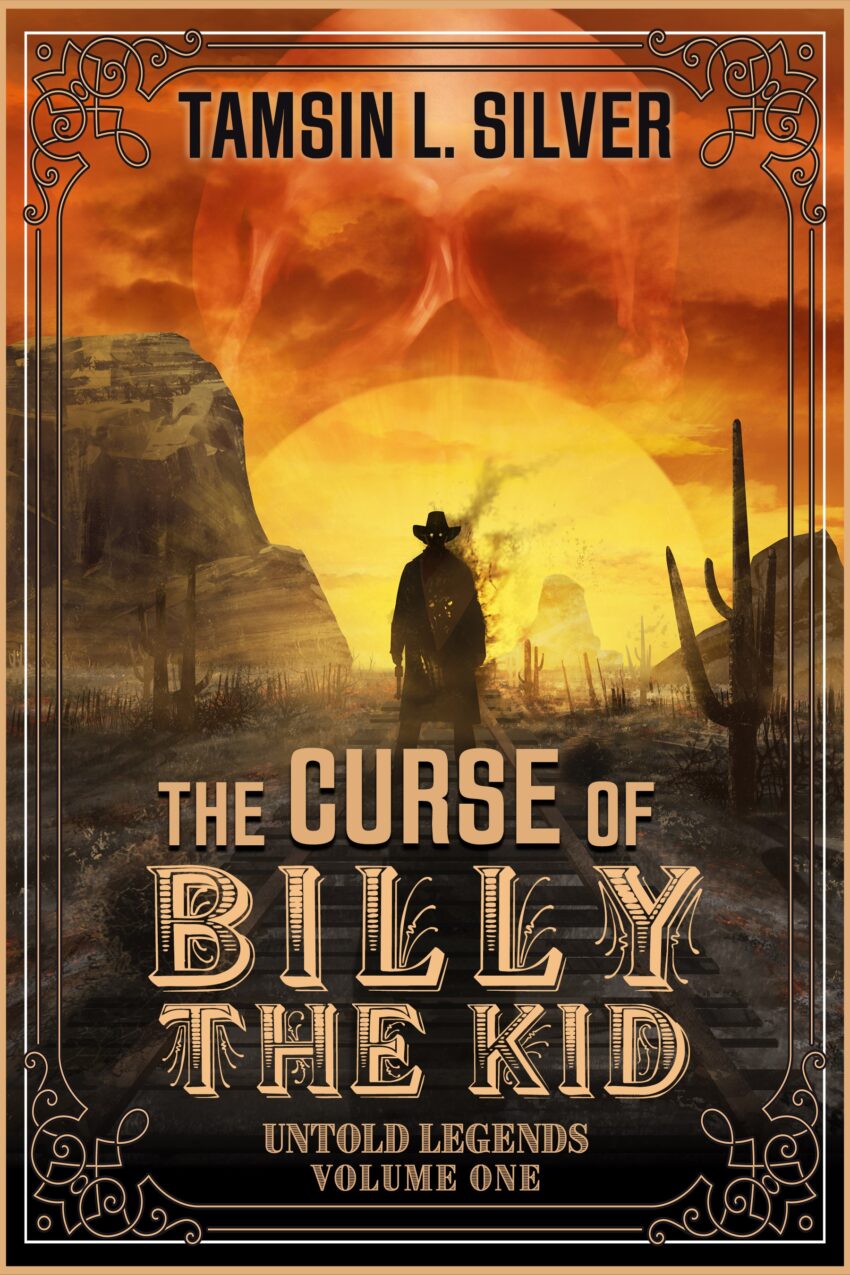 I met Tamsin Silver at my first DragonCon and she and I became fast friends immediately. I’ve read sections of this book in different formats. Heard parts of it in various readings, and talked about it with her over the years. This three part series is a labor of love and it is my extreme pleasure to help introduce it it to you.

What is The Curse of Billy the Kid about?

The year is 1949 and Agent William Kidwell has returned to New Mexico for the first time since he “died” in 1881. While in town for a job, he runs into the same supernatural enemies he fought in 1878. Only by remembering his part in the Lincoln County War can he put an end the true evil that plagues the old west, and kill the woman who still owns his soul.

Go back to when crooked politicians, mafia mentality, and dirty lawmen were the demons that ran the Wild West, and walk alongside the reluctant hero who decided it was time their rein ended.

And now, without further ado…here is a snippet from The Curse of Billy the Kid:

We reached the pit cárcel, a two-room hole in the ground where prisoners were held, and two men lifted the heavy trap door that covered it. Dropping a ladder into place, they told us to head on down. As Fred and Martinez went down, I noticed that the other room, only separated from ours with a low, dirt wall, held two men in it.

When it was my turn, I stepped to the ladder and hesitated. The barrel of a gun was placed at my temple, and I turned to Sheriff Brady and smiled. “This ain’t over.”

Not waiting for a reply, I headed down the ladder into the pit and leaned against the wall, watching the men as they pulled up the ladder and dropped the door to close us in, plunging us all into darkness.

Hours passed in the dark. I slept for a bit but woke up when someone opened the hatch. It was Brady, there to free Martinez but not Fred or me. I cursed him out good, but he still left us there. I fell asleep again. This time though, I woke up to moaning, and not the good kind.

Raising my voice, I shouted to the two other men in the room next to us. “You two all right?”

“No. My friend is…well, you wouldn’t believe me if I told ya,” a young, yet strong voice said.

“Full moon was only a few days ago,” a different voice said in the dark, one that sounded in pain, and I assumed it was the man who had been moaning a few moments ago.

“And the moon is barely waning and rises soon,” the strained voice explained.

“It’s pitch black in here with no view of the outside. How the hell can you tell the moon is close to rising?” I asked.

“I can see in here well enough,” he grunted. “And I can feel the moon.”

“You need to hold it in, Jacob,” the other man said. “Please. Think how you’ll feel if you wake up and we’re all dead.”

This got my attention. “Excuse me?”

“Not sure how I’d feel,” Jacob said, his voice low and gravely. “The more it happens, the less I seem to care. It gets easier.”

I felt my senses become heightened, and I caught the smell of wet dog. Standing up, I shouted, “Is there a way over to you from here?”

“Only up and over,” the man not in pain told me.

“Gonna make sure that man is all right, okay? Now give me a hand.”

With a sigh, Fred found me in the dark, cupped his hands, and helped me get my foot situated into them.

“What are your names?”

“Timothy,” the one man said. “My friend here is Jacob…and he’s not in his right mind.”

“Okay, Timothy…tell me, ya got a weapon on you?”

“Of course not. They threw us down here just like you, without a damn thing.”

I grinned even though I knew he couldn’t see it. “What are you two in here for?”

“Disturbin’ the peace. Jacob here, however, is also charged with attempted murder.”

“That’s not good,” Fred said somewhere in the darkness.

Jacob yelled out in agony, and I heard him begin to flail on the ground.

“Timothy? What is going on?”

Suddenly, out of nowhere, I said, “Is he a damn werewolf?”

My blood heated up. I could feel where Timothy stood and directed my comment toward him. “Answer me, do we have ourselves a furry cellmate?”

Timothy stammered, finally saying, “Yes…it’s new. He has no control. We could all die!”

Jacob made a sound that was not human in any way, shape, or form.

I reached out. “Take my hand, Timothy, and get over here on our side.”

“What is going on?” Fred shouted.

A roar filled the air, and I felt my senses become acutely aware as adrenaline surged into my system. “Now, Tim!”

He reached for me, and with my senses on full tilt, I could see his movement in the blackness. After one failed attempt, I got a good hold on his arm and pulled up as I let my body start to fall over to Fred’s and my side of the pit cárcel.

“Fred, help me pull him the rest of the way over.”

With no idea what was going on, Fred helped me and Timothy over, both of us landing with a thud on the dirt floor just as something large and strong slammed into the wall between the two rooms.

“What in the hell was that!?” Fred yelled at me over the wolf’s roar.

“Umm…it’s a werewolf, Fred, and if he breaks through that wall, we’re all dead. Any ideas?” I said.

“I gathered that much…what I mean is, why do you know about this, and when did you learn?”

The wolf hit the wall again and dirt flew all around us.

Coughing, Fred said, “My people have known of the lycanthrope for centuries. My question is why do you know and why are they in Lincoln County?”

“I’ll explain in a minute,” I said. “But first, do either of you have any matches?”

I had no idea what that meant until I saw a flash and a flame sprout up, lighting the room.

“It’s a lighter. Traded my old mule to some German guy for it.”

A roar shook the air, and looking up, we watched as paws came over the wall, followed by a head. Thankfully, he got stuck at his midsection.

“Keep that light on a minute,” I said, pulling my gun. “Handle has some silver in it. Up, Fred!”

Without questioning me this time, Fred helped me leap up. With a well-placed swing, I hit the beast in the head, causing him to shake his head, likely due to seeing stars. We sent me up one more time, and with the extra energy I felt, I hit him harder and knocked him out. Slowly, he slid backward and dropped to the floor on his side of the pit.

Timothy closed his lighter. “Will he be okay?”

I turned toward his voice. “Will he be okay? Seriously?”

“Right now he’s not,” I said. “And the sooner you accept that, the longer you’ll live.”

I sat down and felt Fred sit beside me. Tim chose another part of the room, and before I knew it, he was snoring.

“Not sure I’m supposed to say…hell, I’m not even sure I believe it.”