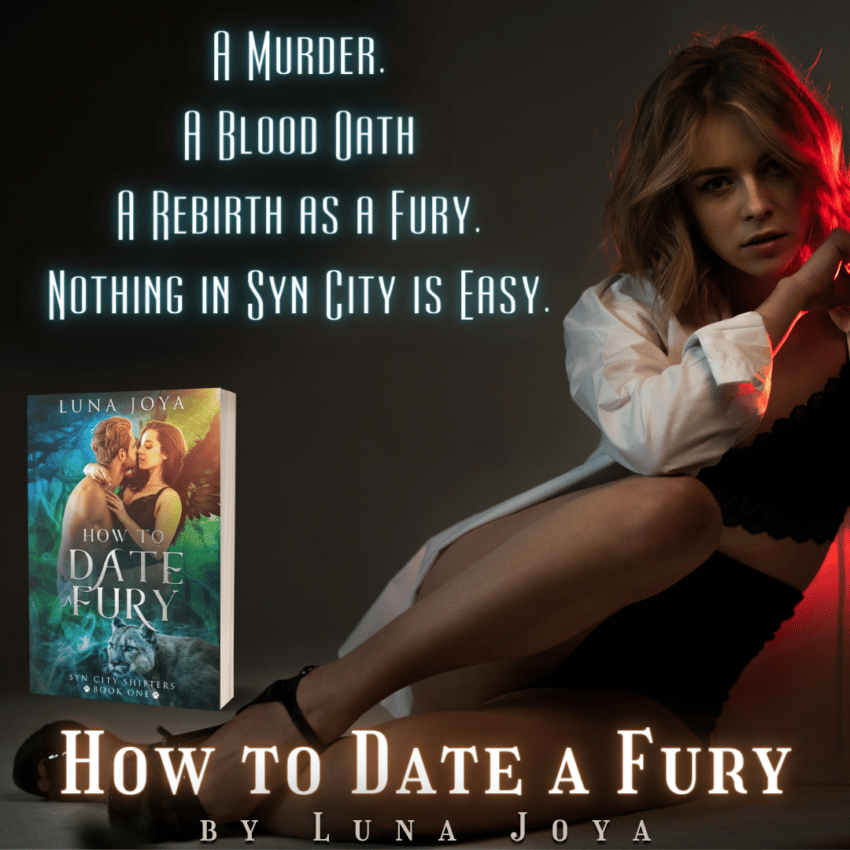 How to Date a Fury by Luna Joya

Who knew dying would be the easy part of my day?

It all started the night Chase, my mountain lion shifter ex, reappeared. We’d had a whole good girl/bad boy romance going until he abandoned me a decade ago. I’d gone to Syn City for a little fun before being trapped in my hometown forever.

Then I was murdered by a maniac and my night really fell apart.

But somehow, Chase managed to strike a deal on a blood oath and bring me back as a Fury. He wants a second chance at romance, claiming we’re fated mates.

Now, I have to deal with the guy I thought I’d never see again, find and punish my murderer, and participate in a giant supernatural roller derby (long story)—all while trying to earn my wings.

And if I fail? I’ll end up dead. Again…only this time, it’ll be permanent.

All I can say is that it’s a good thing hell hath no fury like an actual Fury.

How to Date a Fury, the first book in the Syn City trilogy, is a dark, sexy, paranormal romance featuring a reluctant Fury and the shifter who broke her heart but wants a shot at mending it. Happily ever after (and plenty of snarky fun) guaranteed. Perfect for fans of Linsey Hall, Jaymin Eve, and Amelia Hutchins.

Chase Malone’s kissing me. His mouth’s on mine, hard but inviting, playful even. My brain stops, and my world spins until I lean into him, sure he must feel my heart pounding so hard when I’m pressed against him. He tastes of a wild sweetness like the ripe berries we used to pick off the vines in summertime, and I want this to go on forever. But he stops, and I make an embarrassing whimper of need that I wish I could take back. Except he nips at me again, a teasing snap of his teeth ending in a growl.
“You’re such a cat.” I swat at him. Two can play at his tricks.
“Guilty.” He curves his mouth in a lazy feline grin that shouldn’t be so darn sexy. “Still convinced we’re just friends?”
“I don’t know.” I resist the urge to lick my lips, to check if his taste’s still there. Nine years ago, I would have fallen over him—or my own feet to get to him—for a chance at another hug or kiss or anything. But now, I’m a Fury who’s been left behind once, and I’m not risking him doing it again in my second life. “I mean the kiss was nice …”
“Nice?” He stretches the word, breaking it down like a lion biting back a snarl.
“Don’t get all het up about it. I’m sure you—”
His mouth comes down on mine hot and demanding, but still slow and smooth as if he has years to change my mind. Or maybe he’s a big cat on the prowl, ready to stalk me as long as it takes for me to agree we might be more than friends. A pulse of power rips through me, something fierce and feral pulling at my chest, a firework exploding from within, tearing me into a thousand shiny, sparkly pieces only to stitch them back together in a beautiful constellation of memories.
Memories with Chase.
I suck in a breath, scrambling to make sense of what just happened. My heart pitter-patters like a hummingbird’s wings in a frantic beat, and my every nerve snaps to attention more alert than the tin soldiers in one of Chase’s old games. I stare at him, and he looks as dumbfounded and dazed as me. Only he’s surrounded by a crackling rainbow.
Honeysuckle yellow, kudzu green, summer sky blue, muscadine purple, and magnolia white—those colors swirl and spin, a stirring memory of the glowing water globe he once found us that I loved to shake, then wait until the confetti settled, only to shake it again. “Chase, what’s happening?”
“The mating bond, I think.”

Want to delve into more of Luna’s work? Check out her completed Legacy Series, her on-going Wicked Series, and for our LA readers, check out her signing at Book Carnival on October 29th from noon-2 p.m.
Want to keep up to date on Luna’s work? Follow her on Amazon, Bookbub, Goodreads, and join her street team group, Luna’s Lovelies, for excerpts, giveaways, and sneak peeks at upcoming work.