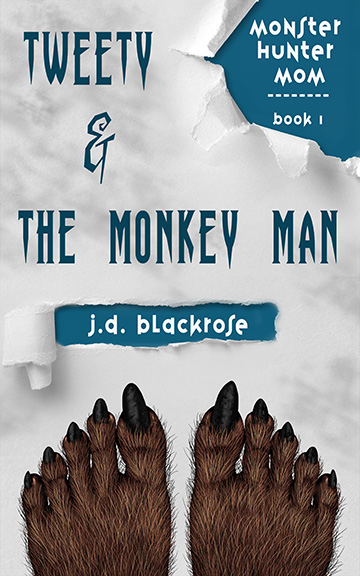 Move over, Bubba, there's a new Hunter in town, and she's having a really crappy day!

Today, it's probably the monster hunting.

There's a phoenix running around town, and a were-gorilla going nuts in the zoo. That's not the worst thing Jess has to deal with - she's also in charge of snacks for her daughter's kindergarten class, and it's looking an awful lot like Cheetos are the answer. This won't go over well with the other moms, but they're the least scary thing Jess has to worry about.

Were-gorilla, remember? Can Jess get the Monkey Man dealt with before snacktime? How many pushups will she owe her trainer for all the swearing it's going to take to get out of this mess? And how old was the apple juice in her cupholder?

J.D. Blackrose spins an awesome blend of the mundane and magical in this novella about a woman just trying to make it in the world, a world that happens to contain a lot of monsters, and judgmental kindergarten teachers. But it also contains Cheetos, and that makes everything better.

They are the first line of defense against the things that go bump in the night.
They are the keepers of a centuries-old legacy of The Church defending the world against the forces of darkness.
They are a bunch of highly armed rednecks, internet video celebrities, soccer moms, and assorted broken nutjobs.
They are the new Templars, and things are about to get weird.