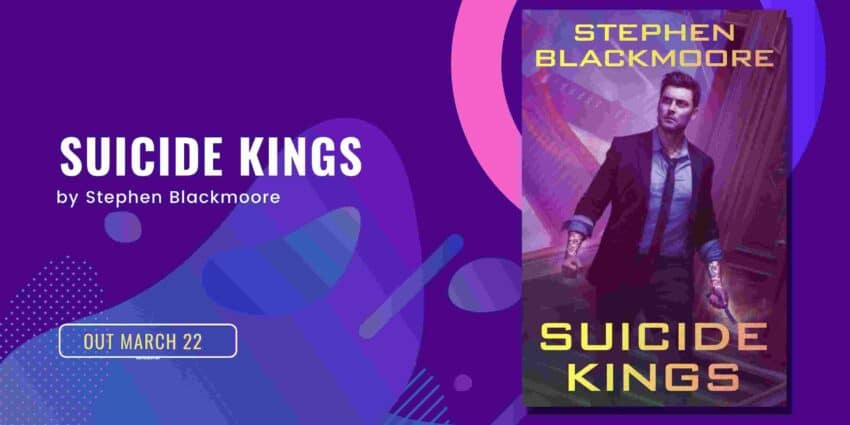 Suicide Kings by Stephen Blackmoore continues the Eric Carter series, and damn, it continues to be so good.

Is Stephen Even Real?

Can you have a writing buddy that you’ve never met in person? Yes, you can! Stephen and I talk via Twitter Messages, with an occasional email thrown in. I’ve seen photos of him so I believe he exists. Also, he writes the best supernatural noir out there. So, I’m going with yes, Stephen is real.

No. Eric is fictional. And I think that is a good thing. Eric is a necromancer who gets in all sorts of trouble. By Suicide Kings, there is not a lot I can tell you that won’t be spoilers. Eric is back from the dead and is still trying to figure out who he may or may not be since he got spliced from his merger with Mictlantecuhtli. A major magic family is playing a serious game of Clue and Eric gets pulled into it.

I asked the ever-eloquent Stephen a few questions . . .

Q: Why does Eric have to get physically beat up? Every book I’m afraid this is going to be it. The man’s going to surpass the amount of pain he can withstand and go beserker.

A: Because he does really stupid shit that makes people want to punch him.

Q: Does Eric have any god powers left after the separation from Mictlantecuhtli?

Q: Have you ever read a book and thought, “damn, I’ll never be this good?” I just had that experience with Naomi Novik’s Spinning Silver.

A: That describes 90% of the books I’ve read. Recently probably Martha Wells’ Murderbot series, Tamsyn Muir’s Gideon The Ninth. The writing feels effortless. I know it isn’t. Not by a long shot, but they make it look so easy.

If you want to see the Eric Carter reading series in order, visit here. Suicide Kings is available for purchase March 22 from all the usual places.

Pre-purchase from Amazon (Paperback or Kindle), Barnes & Noble, and Indiebound.

Read one of my prior reviews of the Eric Carter series here.