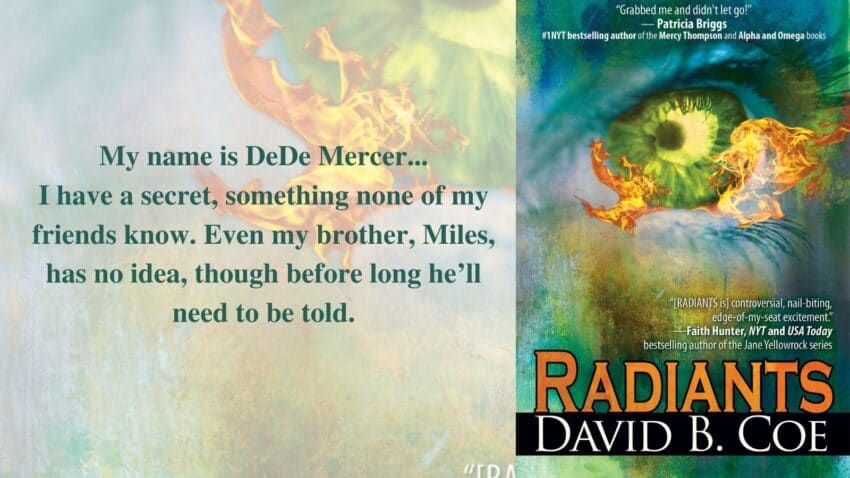 Do I feel lucky? Huh? Do I? YES! I do feel lucky. I have a peek at David B. Coe’s new book, Radiants, and it is well named. You’re going to want to pick this one up. It comes out October 15. (Links below)

Below, DeDe explains to us who she is and what she can do, and then David discusses writing her story. Enjoy!

My Name is DeDe Mercer

My name is DeDe Mercer, and I guess you could say that I’m a fairly typical teenager. I’m an okay student. Not the best, but I try hard. I do well in math and science. I kinda hate history. I swim and play soccer, and spend as much time as I can with my friends. I live in a small town in Oregon — Cottage Grove; boring, small-minded, sometimes mean — where my mom is a therapist. My father died when I was little; to be honest, I barely remember him. Still the three of us — Mom, my younger brother, Miles, and me — live in a nice house and have, at this point, established a well-worn routine.

But I have a secret, something none of my friends know. Even Miles has no idea, though before long he’ll need to be told.

I can control the thoughts of others. I can step into someone’s mind, make a decision for them, and then jump back out, leaving my will imprinted on their thoughts. I used my power once, when I was twelve, against my mom of all people. Needless to say, she was furious and terrified when she figured out what I’d done. She wasn’t altogether surprised, though. Apparently my dad could do stuff — he was a Radiant, too. Mom called my power a violation, a rape of the mind, and she made me promise that I would never do it again, to anyone.

I’ve kept that promise. Until now.

Their Name is Kyle

Kyle, my closest friend and secret crush, is gender-fluid. They prefer non-specific pronouns, but otherwise keep to themself. In our little town, however, just being enby is enough to draw the attention of bullies and bigots. The other day in school, one of those bullies started a fight with Kyle. Big mistake. Kyle may be small, but they can defend themself. The guy who started the fight, a football player, wound up with a bloody nose, despite being a foot taller and probably eighty pounds heavier. The school principal wanted to suspend Kyle. He called them “a disruptive influence.” I wasn’t willing to let that punishment stand. Talk about unfair. So, I used my power to change his mind.

I was helping my best friend, and I’d do it again. But now my family and I are on the run, pursued by government agents who want to turn me into their tool. Or their weapon. They’re willing to break any law, hurt or kill anyone who gets in their way, just so they can force me to do their dirty work. They’ve even taken my mom as their hostage. Well, I’ve had enough. It’s time for Miles and me to take a stand and fight back.

They think I’m a weapon. Fine. They’re about to find out how right they are.

A Word from David

DeDe is the lead character of my new supernatural thriller, Radiants. She is, as she says up front, a fairly typical teenager, in that when we scratch the surface, we find there is nothing ordinary about her at all. Her relationships with her brother and with Kyle form the emotional foundation for the novel, and we view much of what happens in the book from DeDe’s perspective.

Now I am not a teenager, and when I was, the world was a different place. Phones were wired into the walls of my house. There was no such thing as the internet, much less social media. Of course there were gender-fluid people in my community, and in my school. I had a class with a kid who had been born male but clearly identified as female. At that time, however, the word “enby” was decades away from entering the lexicon, and most of those who identified as gay, or queer had little choice but to hide their “difference.”

The kid I mentioned a moment ago was the exception. They refused to hide who they were, and paid a terrible price in verbal, emotional, and physical abuse inflicted by a substantial number of the students in my high school. They and I weren’t close, but even then I recognized that they were incredibly brave, braver, I believe, than I could have been at that age.

I’ll admit that when I first started writing Radiants, I questioned whether I — a middle-aged, CIS male — was the right person to write the story of a queer, teenaged girl who is in love with her gender-fluid best friend. In the end, though, I decided this was the wrong way to frame the question. I am not my demographic profile. Neither is DeDe. I am not a middle-aged, CIS male writing a queer, teenaged girl. I am David, writing DeDe, and if I hadn’t written her story, her tale never would have been told.

A better question, I believe, is how and why DeDe presented herself to me as a character. Where did she come from? Why did I feel compelled to write her story? And honestly, I have no idea. The creative process is as hard to fathom as it is miraculous. All I can say is that DeDe came to me fully realized. I didn’t need to “figure stuff out” or brainstorm her background and personality. I knew exactly who she was the moment I encountered her in my imagination. Or maybe it’s more accurate to say she knew exactly who she was.

She is strong, stubborn, resourceful, keenly intelligent, passionate, and also compassionate. She is, in short, very much like my daughters, Alex and Erin. I may not be a teenaged girl, but I lived through the teen years of two extraordinary young women, who taught me, by their example, what it is to come of age in the 21st century.

I hope you will enjoy DeDe’s story. You can find more information about Radiants here. https://www.davidbcoe.com/radiants/

Many thanks to Joelle for hosting me!

David B. Coe is the award-winning author of more than two dozen novels and as many short stories. He has written epic fantasy — including the Crawford Award-winning LonTobyn Chronicle — urban fantasy, and media tie-ins, and is now expanding into supernatural thrillers with Radiants and its sequels. In addition, he has co-edited several anthologies for the Zombies Need Brains imprint.

As D.B. Jackson, he is the author of the Thieftaker Chronicles, a historical urban fantasy set in pre-Revolutionary Boston. He has also written the Islevale Cycle, a time travel epic fantasy series that includes Time’s Children, Time’s Demon, and Time’s Assassin

David has a Ph.D. in U.S. history from Stanford University. His books have been translated into a dozen languages. He and his family live on the Cumberland Plateau. When he’s not writing he likes to hike, play guitar, and stalk the perfect image with his camera.

David B. Coe’s book is brilliant. Here is where you can find it.