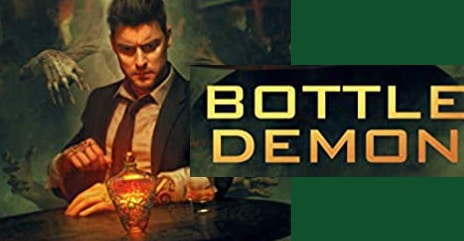 Stephen Blackmoore’s Bottle Demon releases on May 4th, and if you are a fan of his writing, you’ll want to get it. If you don’t know who Stephen Blackmoore is then you are in for a treat. But, start with the first one in this series so you can follow the storyline. It is his Eric Carter series. The first one is Dead Things.

I’m just going to say it. Stephen Blackmoore is simply one of the most talented noir writers out there today. Full stop. But he is also a paranormal writer, and that makes his series even more wonderful. In fact, I’ll put the Eric Carter series by Blackmoore up there with Richard Kadrey’s Sandman Slim, and that’s saying something.

This is the sixth book in the series and Carter, necromancer, finds himself back in the world of the living, unsure how he got there, and he’s a tad resentful. He’d made his place in the Aztec afterlife and being shoved back into a human meat shell wasn’t what he wanted. But someone has brought him back. He needs to find out who, why, and still deal with a pesky Djinn that just won’t go the hell away.

Secrets abound, and a new mage is making trouble. L.A. is different than he remembers and his safe hideaway isn’t so safe anymore. Besides, the hideaway has secrets of its own.

I am being purposely vague because I want you to discover the book, and the series yourself.

Can I read Bottle Demon as a stand-alone?

You can, but I wouldn’t recommend it. Blackmoore writes this series as a series, where things happen in the past books and you’ll need them to understand this one.

Is this the end of the Eric Carter series?

Luckily, this is not the end of the series. Blackmoore told me there will be at least three more. I had to check in with him about that because Bottle Demon has a surprisingly uplifting ending. Usually, the books end with a solid note of finality, but there’s always the next problem right around the corner. I’m not sure where Blackmoore is taking Eric, but I’m going to be happy to follow.

Buy Stephen Blackmoore’s Bottle Demon here on Amazon, and here on B&N. Also, I highly recommend following the author on Twitter at @SBlackmoore.

I discussed the third book, Hungry Ghosts, and number five, Ghost Money on this blog if you want to check out those reviews. Somehow I missed number four, Fire Season.