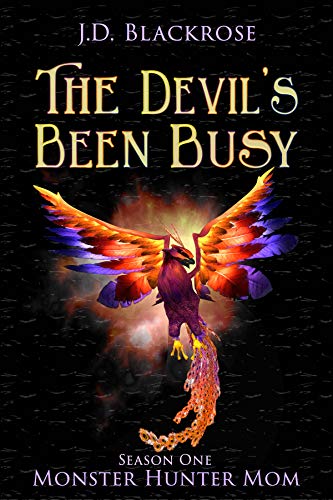 Narrating you own audiobook is such a stupid, egomaniacal, crazy, insane thought that anyone who even considers it should be slapped silly. At least twice.

Audiobooks are performances, not recitations. Reclusive pen monkeys dance to the tune of the characters in their heads but we rarely hear the voices out loud. We need actors to take control of the text and interpret our imaginary friends as people with voices and gestures and nervous ticks. Not until a trained actor gives the characters life and breath, sighs and pitch, do the characters jump off the page into our ears.

So why did I do it? Why narrate The Devil’s Been Busy, the Monster Hunter Mom, Season One, myself?

Obviously, I’m insane, and no one slapped me. Also, something happened.

We couldn’t find anyone willing to do the book. My readership is too small. The writing is a little too quirky. The main character is a Jewish mother with three kids who fights monsters for the Holy Roman Catholic church. And she doesn’t use guns. What kind of monster hunter doesn’t use guns?

Well, my Monster Hunter Mom doesn’t. She hates them, and she’s much more comfortable with the equipment she finds in the back of her Toyota Sienna mini-van, like baseball bats, jump ropes, and Spot & Stain remover.

The book was sitting in ebook, hardback, and paperback formats, but not audiobook, so it was missing an entire market.

Then I did a reading at a local convention, ConConction, and it went really well. My old acting chops from high school and community theater rose to the fore and the reaction was fantastic. A writer friend, KM Herkes, said to me, “You know, Joelle, the reason you can’t find anyone to do these voices is that you are Jess. You need to do this audiobook.”

I was flabbergasted. I hadn’t even considered it, but it is true that I’m a Jewish mom of three kids who lives in suburban Cleveland. Jess is an infinitely cooler version of myself, although I like to think I’m not quite as much of a hapless mess as she is sometimes. (I usually keep both shoes on, for example.)

I had to work out the financials and that wasn’t trivial. Luckily, I have a professional studio I’ve worked with in the past and they were willing to be flexible. Also, I’ve done a lot of voiceover work for various employers and on-camera work, so I had familiarity with the studio process.

The learning curve was huge. My most serious problem was going too fast. I had to learn to slow down and use the speed of my words as a pacing device. I came to hate some of the names I gave characters. Some were hard to pronounce. One had a French accent. All three of my child characters have names that begin with the letter “D.” That’s something I did on purpose when I wrote the book, but it stinks when reading the book out loud. I sought help from a voice coach to help me do the entire book without killing my vocal cords. I learned that if I want to do this again, I will need vocal coaching to lower my register to do more male voices.

I had to Google words to make sure I was pronouncing them correctly. I found mistakes in the book that I couldn’t fix and cringed at every lazy sentence. It was painful to read my own work but it made me a much better writer. I will always read my writing aloud and use the ‘reading out loud’ function in MS Word from now on. It will be a part of my regular editing process. It helps catch those tiny missing words like “it” and “that.”

At first, I could only do two or three chapters in the recording booth, but by the end I did six a session. I was so much better at the end that I went back and re-recorded the first chapter to make it consistent with the quality of the rest of the book.

I learned about ACX rules and requirements and joined the ACX Facebook group, which is humbling because I don’t understand any of the technical terms. True professional audiobook narrators are not just actors but also sound engineers and small business owners and are the most multi-talented people I’ve ever encountered.

One of the most beautiful things to come of doing this was a total surprise. My husband genuinely liked it. Fantasy is not his genre. He’s a brilliant scientist and if he sits down to read for pleasure, he reads biographies or memoirs. Maybe a nonfiction book about an interesting time in history. He’s a serious man with a serious mind. Reading my stuff is painful for him. He’s incredibly supportive of me, but it isn’t his thing.

Then he listened to my book and actually liked it. It made me so happy.

So, even if you don’t think you’d like this kind of book, give it a chance. If a pharmacologist who is literally, probably, going to cure cancer one day can enjoy Jess’ exploits, you just might too. And if I said to you, “Can you imagine what Buffy the Vampire Slayer would have been like if she’d married Riley, converted to Judaism, and had three kids?” and you’re nodding, this book is definitely for you.