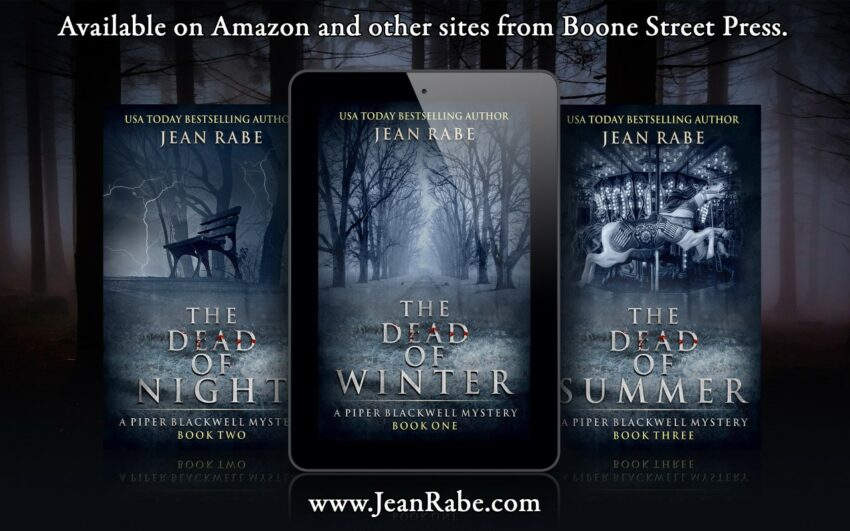 So excited to share this excerpt from Jean Rabe’s Dead of Summer. Scroll down for the Rafflecopter link as well! Buy the book on Amazon here.

He glanced over his shoulder, eyes wide as if in terror. Then he lengthened his stride, cutting past Mona’s Mirror Maze, slipping around the Champion Chopper Ride ticket booth, and racing out of sight.
The pastel-painted helicopter cabs were a smear of pink and blue as Piper ran by them, and through gaps in the poles that connected everything, she saw the flash of her target’s dayglow yellow shirt.
She sucked in a breath, pulling in the scents of popcorn, something sugary-sweet, and sweat—Piper’s shirt was soaked and she imagined her concealed small-of-back holster was outlined from the dampness. A sheriff twenty-four/seven, she always carried a badge and a gun. She hoped she didn’t need to use the latter.
“I just want to talk to you!” she hollered. “Stop!”
The man was nearly a foot taller than her, legs longer, and Piper guessed he was in his late twenties. She wasn’t about to let him get away. Was he fleeing because he’d mishandled the ride and caused the disaster? Was it his fault? An innocent soul wouldn’t run.
Planting a foot, he whipped to his left and bolted between pens in the petting zoo. His feet churned over a dirt aisle covered with hay. Sheep, pigs, cows, chickens … the disturbed animals made a racket. The scents changed to manure and musk.
“I said stop!” Piper gained on him a little, but hadn’t expected him to leap into the pony enclosure and scamper through the fence on the other side. Piper went around it.
“I ain’t burning! I ain’t burning!” He ran down a slope away from the fairgrounds and toward a collection of small trailers—the portable homes of people who worked the fair and carnival circuit. It looked like her target was heading to a retro-looking camper that resembled the back half of a VW van soldered onto a big cab Ford. A dozen men and women gathered near one of the largest trailers, beer and soda cans in hand, watched and pointed.
“Vern!” one of them shouted. “Vern!”
“I ain’t burning in hell!” the man hollered over his shoulder. “I ain’t burning. I didn’t do anything wrong!”
“Then stop!” Piper shouted.
The man slowed, and he grabbed at his side.
“Stop! I said stop!”
“Vern, you better be listening to her!” a stocky woman yelled.
“Don’t be an idjit,” another added. “She’s some local cop.”
Heaving, the man finally acquiesced, held up his hands, and bent over. Piper rushed forward, reached for the cuffs in her pocket, and paused.

And I write with dogs wrapped around my feet. I get to wear sandals or bedroom slippers to work, and old, comfortable clothes. When the weather is fine I get to write on my back porch. I love summer. I am working on promotions for The Dead of Summer right now, the third in my Piper Blackwell series. It has a nifty cover … which fits where the story kicks off. The first two books in the series are The Dead of Winter and The Dead of Night. Yeah, someone ends up dead in each book. Gotta have a death to make it a murder mystery. and I put a good amount of death in this latest book.

I started getting published when I was 12, studied journalism at Northern Illinois University, then went to work as a news reporter…eventually for Scripps Howard, where I managed their Western Kentucky bureau. Getting itchy feet, I moved to Wisconsin and went to work for TSR, Inc., the then-producers of the Dungeons & Dragons game. I dipped my itchy feet into the fiction pool and wrote Dragonlance novels for several years.

I’ve written forty SF, fantasy, mystery, and adventure novels (including a couple of ghosted projects), more short stories than I care to count, and I’ve edited magazines and anthologies.

Right now it’s all about mysteries…thrillers, suspense and uncozy-cozies. I had to change genres from SF and fantasy ’cause my feet were itching again and I needed to do something different.

I attend game conventions–as I am a geek about boardgames and rpgs, work as a mentor for graduate-level writing students, and toss tennis balls for my cadre of dogs.