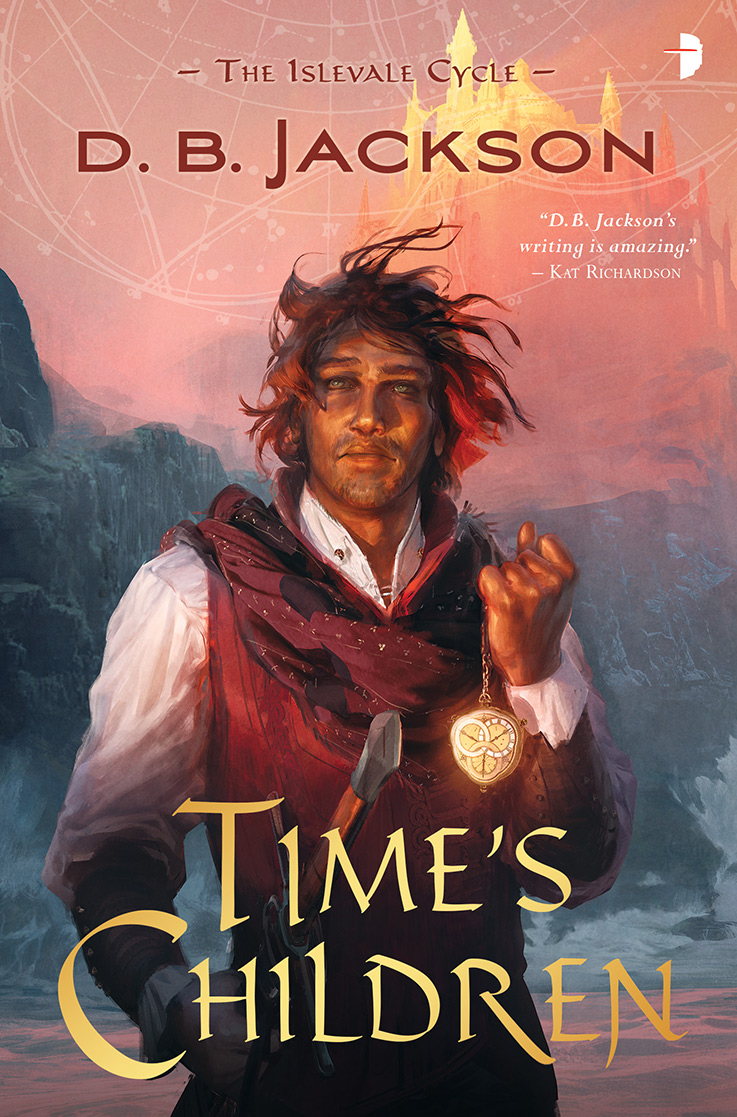 Hello Readers! First, please allow me to shamelessly plug an anthology that I’m a part of and ask for your backing for the Kickstarter. Tales from the Old Black Ambulance contains the most creepy story I’ve ever written, and as editor Jason Graves says, “It’s the last line that really does it.” Feed the Stove is based on the real coal stove from my great-grandmother’s house in rural Pennsylvania, a huge thing that took up half the main room. You’ll want to read it, as well as the other amazing stories. Check out the Rewards as well, including multiple opportunities for a Tuckerization (having a character named after you) and a manuscript critique by Robert W. Walker.

Now, onto the main event, a fantastic peek into the Islevale world by D.B. Jackson, a much-acclaimed new series. Time’s Children is the first novel and I understand number two is even better than this one.

Like so many writers, I am a sucker for a good analogy. Particularly if that analogy is used to describe the very act of writing, a self-referential confluence of medium and message of almost cosmic proportion. As it happens, my wife and I are foodies, and so I never pass up the opportunity to compare my craft to something culinary.

Writing is a bit like preparing a meal. Our outlines are akin to recipes, the act of writing is much like the actual cooking of our food, our revisions and edits correspond to cleaning up the mess we’ve made of our kitchen. I could elaborate, but for the purposes of this post, I’d like to focus instead on our first step. World building, to my mind, is analogous to the pre-cook food shop. It is an excursion into possibility, imagination, ambition, even desire. It’s a gathering of concepts and narrative ingredients, some of which might prove central to the finished product, and some of which we might never use.

I love world building, and I’m especially proud of the world I have created for my newest project, The Islevale Cycle. The first volume in the series, Time’s Children, was released last month by Angry Robot Books. This is an epic fantasy with time travel, demons, assassins, castle intrigue, rivalries among island nations, a bit of romance, plenty of action, and lots of suspense. And like so many epic fantasies, it is set in an alternate world, one of my own creation. I began my career writing epic fantasy, but then got away from that subgenre for a time. Directly prior to starting Time’s Children, I wrote two urban fantasy series, totaling seven novels and more than a dozen short pieces. I loved those projects, but both were set in our world, and by the time I finished them, I was ready to get back to writing in an imagined world.

Three elements of the setting I created for the new series are especially important to me.

The first of these is the actual geography of the place. I envisioned and began work on the series long before Ursula K. Le Guin’s death this past January, but all along I intended Islevale, my island world, to be an homage to Earthsea. The original Earthsea trilogy has long been one of my favorite fantasy series – every bit as formative for me as Lord of the Rings. So I chose to create a world of island nations, of seas and straits and archipelagos.

I then populated it not just with people, but also with beings I call the Ancients. (The humans of Islevale, in their fear and ignorance, call them demons.) There are several septs of Ancients. For these books, the most important are the Tirribin, or time demons. They look like children. They never mature, because as they expend their years living, they replenish them by feeding on the years of humans. They’re skilled hunters – dangerous, often deadly, though never to my time travelers, whose years are confused and altered, and therefore soured. Tirribin time sense goes far beyond that of other beings. They can tell when a person’s years, or even history itself, have been altered by time travel. One can distract a Tirribin from its hunting with a riddle, but be certain it’s a good one…

Other Ancients include the Shonla, mist demons, who feed on fear and screams, but rarely kill. They hunt at night, floating over the sea in mists of their own making. They can be summoned with a song, and will also eschew screams for music, though it takes a quick and clever negotiator to forge such a bargain. Belvora, demons that prey on magical creatures, are winged and powerful, but dull-witted. Arrokad are known as the Most Ancient Ones. They’re creatures of the sea. Beautiful, wise, sexual, capricious, imbued with powerful and mysterious magics. They are canny negotiators, the leaders of all the septs. And there are other Ancients as well. I love writing them – there’s a reason why the second Islevale book (coming in May 2019) is called TIME’S DEMON.

The third key world building element for this series is the magic. All my past worlds have had a single magic system. Islevale has several. In addition to the Ancient magics described above, I also have Traveler magic: Walkers, who can move through time; Spanners, who can travel long distances; Crossers, who can move through solid matter. Travelers are dependent on the magic of Binders, who create golden devices that enable the Travelers to ply their trade: Chronofors (akin to pocket watches) for Walkers, Sextants for Spanners, and Apertures for Crossers. Binder magic is similar to healer magic, in that both act on physical matter, and both manifest as a nimbus of light surrounding the person using the magic. Finally, the Magi are as valued in royal courts as Travelers. Magi can divine the future, or remember every detail they see or hear, or perceive truth and lies in the words of others. Their magic relies on a spirit-like drink called tincture that is expensive, narcotic, and highly addictive. All of these magics are related in a sense, and yet all of them also exist and act independent of one another, and at times in competition with each other.

Naturally, there are other elements of my world building that I don’t have space to mention – religions, political systems, international rivalries, commerce, rudimentary manufacturing, agriculture, extensive histories, cultures, arts, folk traditions. I couldn’t possibly explain all of it, and even if I could, I prefer to let you discover these things on your own, as you dive into the books.

We read stories, particularly fantasy and science fiction, to explore new worlds for ourselves. I write for much the same reason. Yes, I create my worlds, but that’s not how it seems in the moment. World building and writing are acts of discovery. When I work, I don’t feel like I’m making things up, so much as learning about a new place and recording what I find so I can share it with my readers. I know this sounds geeky, but I find the process incredibly exciting, and I know many of my colleagues feel the same about their work.

So, I hope you will check out my new book, and I hope you’ll enjoy this world I’ve discovered.

Many thanks to JD Blackrose for hosting me today!

D.B. Jackson is the pen name of fantasy author David B. Coe. He is the award-winning author of twenty novels and as many short stories. His newest novel, Time’s Children, is the first volume in a time travel/epic fantasy series called The Islevale Cycle. The book has recently been released by Angry Robot Books. The second volume, Time’s Demon, will be released in May 2019.

As D.B. Jackson, he also writes the Thieftaker Chronicles, a historical urban fantasy set in pre-Revolutionary Boston. As David B. Coe, he is the author of the Crawford Award-winning LonTobyn Chronicle, which he has recently reissued, as well as the critically acclaimed Winds of the Forelands quintet and Blood of the Southlands trilogy. He wrote the novelization of Ridley Scott’s movie, Robin Hood, and, most recently, The Case Files of Justis Fearsson, a contemporary urban fantasy.

He is also currently working on a tie-in project with the History Channel. David has a Ph.D. in U.S. history from Stanford University. His books have been translated into a dozen languages.

He and his family live on the Cumberland Plateau. When he’s not writing he likes to hike, play guitar, and stalk the perfect image with his camera.