Stephen Blackmoore’s third book (Hungry Ghosts) in his Eric Carter series will, finally, be available February 7th. For those who read the first two books, the third will not disappoint. 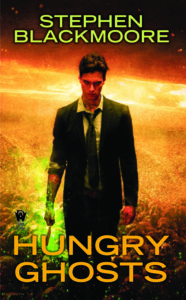 nti-hero through his story we witness Eric continue his rampage through whomever and whatever gets in his way, human or supernatural, to reach his goal of destroying his metaphysical wife, Santa Murete, and her jade imprisoned husband, Mictlantecuhtli. He makes promises he can’t keep, destroys property, drinks too much and acts and feels like a man at the end of his rope. Every once in a while we realize Eric does have some concern for innocents left in his soul, but we are witnessing a man on a dangerous slide downward.

In one of the most stark and riveting parts of the book, Eric reaches Mictlan, the Aztec world of the dead. This is where Blackmoore shines. He creates a vision of a hell scape that pulls you in. I could see it vividly in my mind. Part Mad Max and part Jurassic Park, it isn’t a place you’d like to be, but you don’t mind visiting for a while.

I asked Stephen about this.

1. How did you get the image of the afterlife in Mictlan? You did an amazing job creating a sense of place.

I’m really not sure. I know it started with an image of a landscape made of bones and then I grew it out of that. It first shows up in DEAD THINGS, and I liked it so much that I wanted to have it in HUNGRY GHOSTS, but I also wanted to explain it better. Mictlan isn’t Hell, and I wanted to get across the idea that on some fundamental level the place is broken.

2. Our hero is an anti-hero. He’s done some pretty messed up stuff. Is he expecting to pay for that when he dies?

Not really. His moral compass doesn’t really swing that direction. Yeah, he gets guilt and regret, but they’re not keyed into some grand cosmological debate of right and wrong. He doesn’t know what’s going to happen to him, but he’s also not much of a forward thinker. He has enough problems without worrying about that.

There’s a line in the book that I think sums it up for him.

“Mages are surprisingly agnostic. Yes, we know there are gods, we deal with them all the time. We just think they’re largely irrelevant and mostly assholes.”

3. Is Santa Muerte pissed or what? So are the other gods I would imagine. This isn’t going to go well for Eric, is it?

Where it gets even more interesting, is that at the same time she’s also seen as a love sorceress. So there’s this part of Santa Muerte that is an amorphous, hard to nail down concept of entropy, and at the same time there’s an actual individual who you can pray to for help in matters of the heart.

They sound like they contradict each other, but I don’t know that they necessarily do. Love and death have a lot of visceral connections that we don’t always like to think about. Death is easier to see as an undefinable and indefatigable force. But we don’t really perceive love that way. We’re all guaranteed a death, we’re not all guaranteed that something’s going to love us.

In my books she’s not just Santa Muerte, who actually has more connections to the Spanish than she does to the Aztecs, but she’s also Mictecihuatl, the Aztec goddess of the dead. The evidence for them being connected in real life isn’t really strong, but it’s easy to tie them together at least in fiction.

I wanted to keep that idea that emotionally she’s very alien. She sees the things that she does as right and good. Hurt isn’t something she’s got a lot of experience with, and death isn’t something that she’s going to see as a bad thing.

Killing the things you love to show your love for them isn’t a concept that makes sense to us (hopefully), but to her it’s like saying water’s wet.

There’s a bit where Carter is talking about this weird pseudo-relationship he has with her.

“It’s fucked up, like Sid and Nancy fucked up. She’s not human. She’s not going to feel the way we do. The fuck does love even mean with her? Love the way a dog loves a bone? Love me enough to murder my sister to get my attention? That’s insane to me. But it isn’t to her. I think she loves me for what she can use me for. She’s got a plan. And I’m a big chunk of it.”

I did ask Stephen about one important character, Tabitha, whose fate is unrevealed. She’s as much a victim as Eric is, perhaps more so, and we are left hanging. So…I asked:

4. Can you give us any hint about Tabitha’s fate?

Arrrrrggggghhhhh. Guess we’ll have to wait for book 4.

Buy it on Amazon here.