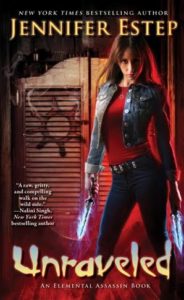 UNRAVELED – excerpt #13
I cursed. Even though I wanted to rush inside the mansion, I forced myself to slow down and approach the patio doors with caution, just in case she might be lying in wait to try to kill me too. I also grabbed hold of even more of my Stone power, hardening my skin as much as possible on the off chance that she decided to blast me with elemental magic and bullets. As a final touch, I reached out with my magic, listening to all the emotional vibrations that had sunk into the stone walls of the mansion.
Harsh, shocked mutters rippled through back to me, from the shots the woman had just fired. Alongside that was a high, whiny chorus of worry, fear, and paranoia. But there were no sly whispers or dark murmurs of evil intent that would have signaled that she was hiding in the office, ready to put a bullet in my head the second I stepped inside. Whoever the woman was, she was long gone.
Still, I was careful as I eased into the office, my knife still in my hand, my other hand up and lightly glowing with Ice magic, ready to blast whoever might challenge me.
But only one person was in the office: the man I’d been watching.
Jonah McAllister, my old nemesis lay sprawled across the floor.

GIVEAWAY!
There’s a tour-wide giveaway you can share! Jennifer is giving away a $25 Amazon gift card, and the publisher has offered up 5 print copies of UNRAVELED AND one FULL SET of the Elemental Assassin series! Open to US and Canada residents only.

a Rafflecopter giveaway
About UNRAVELED:

What could go wrong when you’re trying to unravel a decades-old conspiracy?
As the current queen of the Ashland underworld, you would think that I, Gin Blanco, would know all about some secret society controlling things from behind the scenes. I might be the Spider, the city’s most fearsome assassin, but all my Ice and Stone elemental magic hasn’t done me a lick of good in learning more about “the Circle”. Despite my continued investigations, the trail’s gone as cold as the coming winter.
So when Finnegan Lane, my foster brother, gets word of a surprising inheritance, we figure why not skip town for someplace less dangerous for a few days? That place: Bullet Pointe, a fancy hotel resort complex plus Old West theme park that Finn now owns lock, stock, and barrel. At first, all the struttin’ cowboys and sassy saloon girls are just hokey fun. But add in some shady coincidences and Circle assassins lurking all around, and vacationing becomes wilder—and deadlier—than any of us expected.
Good thing this assassin brought plenty of knives to the gunfight…

Jennifer Estep is a New York Times, USA Today, and international bestselling author prowling the streets of her imagination in search of her next fantasy idea.
Jennifer writes the Elemental Assassin urban fantasy series for Pocket Books. Unwanted, e-novella #14.5 in the series, is available now. Unraveled, book #15, will be released on Aug. 30.
Jennifer also writes the Mythos Academy young adult urban fantasy series. She is also the author of the Black Blade young adult urban fantasy series and the Bigtime paranormal romance series.
For more information on Jennifer and her books, visit www.jenniferestep.com or follow Jennifer on Facebook, Goodreads, and Twitter.