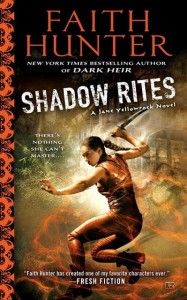 I’ve read every Jane Yellowrock book, short story or novella that Faith has ever written.
This is the best one (so far).

The writing is tight and the book is action packed. You almost never have time to breathe, and most of all, we are finally leading up to the visit from the European vamps. It is so close you can almost taste it…ooh, sorry, maybe not a great analogy when we are discussing vampires.

INTERVIEW: I got a chance to ask Faith some questions, and while she wouldn’t give anything away (grrrrrr….) she did give some tantalizing information.

SW: Why does Jane’s stomach get ripped up when she bubbles time?

FH: Excellent question! I am playing with the effects on matter, time, and space. Time and space are two sides of the same coin. When Jane bends and bubbles time and space, it seems to me that (physics speaking) it would also effect matter, especially matter that is near the time-space alteration. I could have created other potential problems from this modification, but I picked one that might also damage her body and her genetics. Because I’m evil that way. Jane bleeds internally, first in her stomach, and blood in the stomach makes people nauseated. And, Voila!

Oh! The reason for, and solution to, all this is part of the next question!

SW: The Goddess is an early incarnation of Artemis. Are we going to learn more about her and what being her offspring means in the next book?

Yes. And maybe no, depending on how much the readers want. But we really get a lot more about this “little goddess” thing in the shorts and novellas I am writing this year. So stay tuned! I will do my best not to leave it hanging.

SW: Is it possible that Jane will ever give birth to a child? Beast wants kits so badly.

SW: I believe that Edmund’s fall is a calculated part of the long game. Any hints about this?

Good conclusion! Yes. IT is part of Leo’s long game. But I have a feeling that Edmund might be playing his own game too, one hidden by the parameters and goals of Leo’s game.

You asked great questions! Thanks!

Thanks for being with me here on Slippery Words, Faith!

Slaying vampires is child’s play for skinwalker Jane Yellowrock. But handling the complicated politics of New Orleans’ supernatural players is another story…
Jane is keeping the peace between visiting groups of witches and vamps in the city, but then trouble comes knocking on her doorstep. When her house is magically attacked, the wild chase to find her assailants unearths a mystery that has literally been buried deep.
A missing master vampire, presumed long deceased, is found chained in a pit…undead, raving mad, and in the company of two human bodies. Now it’s up to Jane to find out who kept the vampire hidden for so long and why, because the incident could tip already high supernatural tensions to an all-out arcane war.

Under the pen name Gwen Hunter, she writes action-adventure, mysteries, and thrillers. As Faith and Gwen, she has 30+ books in print in 29 countries.

Hunter writes full-time, tries to keep house, and is a workaholic with a passion for travel, jewelry making, white-water kayaking, and writing. She and her husband love to RV, traveling with their rescued Pomeranians to whitewater rivers all over the Southeast.

30 thoughts on “Shadow Rites: The Best Book Faith Hunter Has Written (so far)”