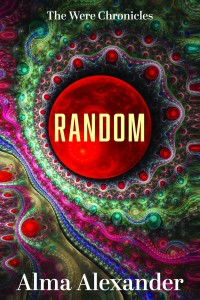 hanks for being with me on SlipperyWords! We are talking about the first book in your Were Chronicles, Random.

1. The story appears, at first, like it is a traditional were story but it
turns into a very deep, profound story about souls and racism. How do your YA readers react to those deeper messages?

Surprisingly, sometimes, it turns out that young people DO think about stuff that older people don’t think they think about. And several responses involved things along the lines of, “I recognise characters like Celia, that sort of things happened to me/to someone I know. I can identify with that character.” I wrote a book which has themes of bullying, and of discrimination – and those are “real world” problems.

That leads to deeper thinking, to questioning where and what one’s
soul is. But of course those are teh THEMES and the story itself rolls
along as a story and readers will respond to that directly. They
acquire the deeper things almost by osmosis, as it were. And that’s as it should be. The last thing I would ever want to do is devolve to
being preachy about something from my own personal sandbox. I like to lead people to thoughts, not to force them to think…

2. The part of the half-souled reminded me a little of the Golden Compass, when the characters were separated, cut off, from their animal avatars. Did you think of that when you wrote it?

Actually, no, because I don’t think I ever read those books (I saw the
movie, I think – or parts of it – lo these many years ago, but I don’t
think I ever actually read the books…) And from what I do remember
of the story of the Golden Compass the situation wasn’t at all along
the lines of my world. My baseline was the concept of Were creatures, not animal avatars – these aren’t avatars, they’re just a different shape of the same creature, part of each other – my Were are genetic, at base, not “spiritual”. My Were’s animal forms aren’t spiritual familiars they’re a different reading of their DNA. The concept of the “half-souled” stems intrinsically from – well – losing a dimension of yourself, becoming paper thin and two-dimensional, fragile and vulnerable. In that sense, the duality of Were is a literal strength – and the loss of that duality a literal physical weakness. The moniker of “half-souled” is a descriptor, here. It translates, if you want, to ‘half-genomed’. I like the idea that we all potentially carry these different creatures inside outselves, that being that ‘different; doesn’t mean that you are a monster. It just means that your deeper secrets are more visible to the world…

3. I like to also ask craft. What is your process for writing? Are you a
pantser or a planner.

Pantser. Half the time I have no clue what is going to happen next,
any more than my readers do, and I keep writing to find out. I am
currently researching a new book – and with every new thing I find out the nebulous idea of the storyline which I think I halfway nailed down changes into something else again. I wrote a terribly inadequate “synopsis” when I first conceived the idea – but here I am, not even having started writing yet, and that original synopsis already bears no resemblance to the story I am currently spinning in my head. And by the time I start writing it will be something else again. This is an immensely dangerous way to work, prone to detours and no-exit dead end roads and meanderings and false starts – but oh MAN, when I finally find the right path, then I forge ahead and I basically never write that horrible proverbial “first draft” because what comes out is already Draft #4. Not perfect, not yet, not ever, but considerably more evolved than anything that a purely planned novel which was written according to a rigid scheme might be. I do all the preliminary editing and discarding in my head, long before words hit page (or screen)…

4. What advice would you give to new writers just starting out who want to publish traditionally?

Um, pray…? It happens. It still happens. But it’s taking an
increasing abount of pure luck – not to mention pig-headedness, and
the hide of a rhino (come to think of it, you might as well be a Were
creature…) In order to get within smelling distance of the Big Guys
you need an agent, and these days getting an agent is every bit as big
an ask as it is getting your story under an editor’s eye. You need to
research your market, pick wisely, submit to the people likely to be
interested in your line of work, and then cross your fingers and hope
that someone sees that glitter of pure gold inside of your novel. And
while you wait… write the next one. Keep writing. Always keep
writing. You’re far more likely to sell a career than a single novel.

5. What’s next for these characters? Can you give us a hint?  I think it
could be very useful for to have a were that turns into another human without any “were” markings on his identification.

The first book – “Random” is all about the Random Were, the kind of
Were critter I seem to have invented purely for this story, the kind
that can Turn into the last warm-blooded thing they see before their
time of change comes upon them.

But “Wolf”, the second book, delves deeper into the science and the culture of the Were kind, specifically the Lycans, the true Were-Wolves, who in my world are scientists with a secret agenda – and the second book belongs to Mal, the brooding, damaged, tragic, fragile older brother of Jazz who was the protagonist of “Random”. It’s about his journey of discovery, and about his growing up and stepping up to accept his own place in his world at last.

The third book, “Shifter”, out in November 2015, is about the creature who helped Mal the Wolf along his path – the ‘shifter’ of the title, an entirely new and unlooked-for kind of shapechanger. This i spossibly the best character in the entire series, and I can’t wait for the world to meet him. There is likely to be a set of stories to
follow this book, more in this world, which is just too complex and
too delicious for me to leave behind that easily. There’s the next
generation to think about, after all.

Give you a hint? Well, there’s an explanation of the genetics of the Were… a glimpse of how the half-souled might be restored to themselves (or die trying)… drawing aside the veil from the dark schemes of the Lycans, and what that means for my protagonists’ lives… and the inevitable war with the fundamentalists whose mission in life is to denounce the Were and their kind as abominations, hated by God himself. These are books that
are nominally about Were-kind, wrapped in the silver tissue of
fantasy. In essence, though, as at least one reviewer has pointed out,
these are books that are essentially… about being human.  And that
is one story that will never get boring, or old.