Lucienne Diver is revealing her new Goddites website today to go with her hilarious series, The Latter-Day Olympians (which I strongly recommend)!  For those who are familiar with the books, this is Yiayia’s blogsite, where we all know we go for the best gossip on all of the gods.

Go check it out and also watch for an interview with Lucienne tomorrow about her latest book!  In the meantime, I have a treat…the dossier of Apollo (and he’s yummy) 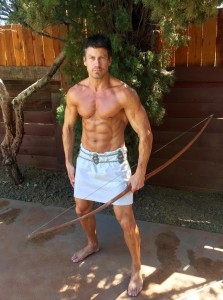 God of the sun (and at least as hot). Also the god of music, prophecy and a whole host of other things. Basically, the ancients adored him so much they just kept piling on, stealing attributes and worship (and thus power) away from other gods to heap upon him. Apollo’s been many things in many cultures – Hobal (aka Hubal) from Arabia, Shamash from Assyrian-Bablonian myth, Horus from Egypt, just to name a few.

Oddly, in his Greek and Roman incarnations, he’s described, along with his twin, Artemis, to be blue-eyed with a mane of blonde hair, leading to belief that he was stolen originally from an earlier pantheon.

He’s rumored to be amazing with a bow and arrow, which is not code for anything more down and dirty…though, pssst, I hear he’s no slouch in that area either.

In fact, rumor has it that not so long ago, Apollo started a film career in the, er, adult arena, which he leveraged into a full-fledged acting career. He’s now getting into management, though he still does some acting on the side.

(My granddaughter would kill me for saying so if her secret weren’t already out in the Latter-Day Olympians series, but she’s quite taken with him herself. In fact, here’s a direct quote from their first meeting:

“Apollo-freakin’-Demas, all six foot two ridiculously ripped inches of him.  I had one of those bizarre romantic comedy moments where the world contracts, spatial relationships are meaningless and he was all there was in the world – just his turquoise eyes meeting my bronze, silently speaking volumes.  All those statues carved in his likeness were such pale imitations as to be sacrilege.”)