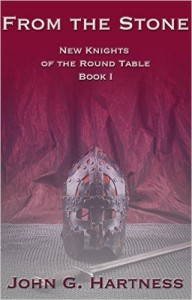 From the Stone by John Hartness is a fast-paced high jinks adventure that combines the King Arthur legend with the worst of high school.  This is simply fun.  Visit John at www.JohnHartness.com.  He has lots of stories you will want to read.

I did. I loved The Once and Future King, and loved The Crystal Cave series by Mary Stewart, I’ve always been a sucker for heroic coming of age stories, traditional hero’s journey stuff, from Star Wars to The Belgariad to X-Men and The New Mutants runs by Chris Claremont.

I wanted to keep the “Arthurian” bits of the legend as close to canon as possible, while using the “Contemporary” parts of the story to show how our world has changed since those “good old days.” In Arthurian legend, there was only one role for women to fill, that of sex object either pure (debatably Guinevere) or dirty (Morgan le Fey). So I didn’t have anyone from the old Round Table stories to turn Gwen into except for a male character. So I decided to not only use the character to show the different role women have taken on in today’s society, but to use the character’s transformation from a 13th-century male warrior to a 21st-century female warrior to look at current issues surrounding gender identity and the fluidity of such notions.

It was important to me that it be a closed fantasy world, and that only those characters that were part of the world know what’s going on. In later stories, that lets me play with conflicts around Rex and his Dad, the Scoobies and the school administration, etc. But you always need a Giles/Dumbledore/Merlin if you’ve got a bunch of teenagers running around solving mysteries. He serves not only as the author’s voice in the story, but is also a device to get young people out of the trouble they inevitable get into by being boiling cauldrons of hormones. And it’s another piece of the Arthurian legend I could play with a little – that of Nimue putting Merlin to sleep in a tree for a few centuries.

I don’t know yet. I do plan to return to Ardrey Kell High (a real place, home of the Knights, really does look like a prison. I worked on the construction of the place.) but not until 2016. I have a Bubba novella coming out in October 2015, then a Harker novella in November 2015, then Part 2 of Queen of Kats in December, PLUS I need to finish the first draft of Black Knight Chronicles #6 before the end of the year, so I probably won’t get back to Rex & co. until January or so. Then I’ll figure out what’s up with little miss Morgan, and eventually our boy is going to have to go to a prom, so that should be interesting.

Featured imaged downloaded from pcwallart.com.  I do not own it in any way. (and I make no money from this blog)