Hi Dee: Thanks for being with me on SlipperyWords!  We are talking about The Use: Changing Magic Book 1.  I thought this was a really 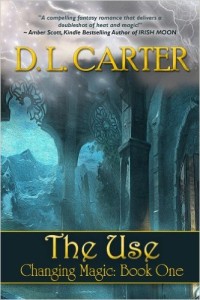 fun book.  It is a rollicking sexy romp through a time and place where elves, humans and magic reign.  And  you are working on book 2, so those that love this book…another two books are coming.

Literacy is important. The invention of writing came alongside the invention of civilization. If we didn’t have libraries then every generation would have to re-invent the simplest things. It is only by building on the knowledge of those who have gone before that we can discover, invent, learn, grow – etc. etc.

In the real world – when I was very young I lived in the outback of Australia. The library came to our house once a month. A truck with sides that folded out. It was amazing and annoying. I was a child so only permitted three picture books. I sympathize with Yental who had to put up with “Picture books for women, scripture books for men.” I’ve been reading on my own since three.  I read very fast. Very fast and wanted more. It was when I was a child that I started writing stories. My mother would watch me read a book and then go outside and walk in circles telling myself stories. of what came next.   I still go to the library even though it is harder for me to read books on paper nowadays.

I also collect, and save my energy for, antique books. I have medical texts published in the 1840’s and an early encyclopedia for  “Persons of the Professional Class” from 1812. If it weren’t for someone’s private library being sold I wouldn’t have these gems.

5. What other books have you published or are working on in this      same genre?

I have the World Wide Witches Research Association and Pinochle Club trilogy – first book is out. Second book is in re-write hell.  First book – First Destroy All Giant Monsters is out on ebook and a load of fun.

Also going with paranormal but in the so called human world is The Adventures of a Super Hero’s Insurance Adjuster – I’ll let you think about the title for a moment because it says it all.

I have a book that I keep going back to that instead of having fertlitity as the elvan problem we have the elves as a human problem. In that universe the elves of a northern conclave went to war with a southern group and in doing so rode back and forth over mortal human society and civilization until they destroyed it – and then the elves went home.

A century later the last mortal who knew how to read goes to demand justice – and a book on healing – from the northern elves who had not, until that moment, realized the consequences of their war.

That book is also in re-write hell but I periodically post exerpts on my blogspot. funwithghoulsandgoblins.blogspot.