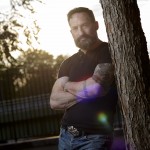 I had the opportunity to meet the fascinating Myke Cole at DragonCon.  I immediately knew I wanted to read his books and interview him for Slippery Words as soon as I heard him speak on a panel. Myke has a lot of military experience and has meshed that knowledge with his love of fantasy literature.  Enjoy!

Here, we talk about Gemini Cell. Visit here to learn about Myke’s books.

It’s only partly magic (particularly for the way in which muscle contracts to support bone to prevent it from breaking). I mention in the text that glycerol is used in place of embalming fluid (what’s normally used for corpses). Glycerol is hygroscopic, a lubricant and moisturizes that also works as an anti-freeze (Gemini Cell Operators are stored in refrigerators and are often frozen). The addition of this to Schweitzer’s body helps keep his flesh elastic and supple despite being dead. I am also careful to mention the use of metal in effecting repairs, not only on him, but on some of the Gold Operators you meet as well (there’s more of this in JAVELIN RAIN).

Lastly, a lot of human physical limits are due to two things that don’t bother Schweitzer: 1.) pain and 2.) the knowledge that we’re injuring ourselves. Freed from these constraints, Schweitzer is able to push his own body like you or I would a rental car.

Thanks. That was actually incidental. I often find that some of my best double-entendres, foreshadowing and turns of phrase are the result of my trying to do something totally unrelated. Not sure if that’s a good or a bad thing.

3. I also really enjoyed the symmetry between Sarah’s story and Jim’s. She finds out he’s most likely still alive immediately followed by a scene in which he finds out she might  be alive.  Did you plan that from the beginning or did that happen organically as you wrote the book?

It happened mostly organically (see my response to your comment number 2), but you also have to remember that the love between Schweitzer and Sarah is a magic unto itself. They are linked by it, and it has real physical implications (the ability to locate one another, for example, and some limited empathic communication). So, it made sense that, as one made discoveries or experienced particular stresses, the other would react. Have you read Sabaa Tahir’s An Ember in the Ashes? One of the devices she uses in that novel is the protagonist somehow being sure that if her brother were dead, she would just know it. This is a phenomena frequently used in fantasy and romance, and also often commented on in real life. I wanted to explore that a bit in my own work. There’s a lot more on it in JAVELIN RAIN.

No. I did all three of my tours in Iraq (the first and third in Baghdad, the second in Balad). That said, the United States’ counterinsurgency operation is all of a piece, and so you can’t fight al-Qa’ida in one theater without knowing a lot about the other. I spent a LOT of time reading about and planning against units and individuals in Waziristan, and came to know it well enough to accurately (I hope) represent it in the book.

I’ve fired AKs, but I never carried one. That’s the weapon we commonly associate with our enemy (but was also used by some of our allies, like the Georgian soldiers I served with). I carried either an M4, or if I was lucky, an HK416, which is a far more sophisticated weapon that I much preferred. The M4 uses the gas from the firing bullet to operate the bolt, which means it needs a LOT of cleaning. The HK416 vents the gas and uses a spring, which means it never jammed and needed almost no cleaning. Also, the heavy bolt made it sit down in my hands and made it more stable.This helped me shoot more accurately.In the Coast Guard, I carried the M16, which I wouldn’t use to prop open a door. What a piece of junk.

I started writing as a kid, when my mom got me a vinyl record of the audio for Ralph Baskhi’s animated Lord of the Rings. There was a transcript of the dialog, and I asked my mom for pen and paper, went to my room and copied it word for word. Then I brought it downstairs and proudly told her, “I wrote a book!” It’s all I’ve wanted to do since then.

I wrote throughout my military career. I did a lot of commenting on Peter V. Brett’s THE WARDED MAN and writing my own book titled Latent (it became CONTROL POINT after it sold) during my time in Iraq. I worked 18 hour days as it was, and then still found time to write. I don’t know how I survived for all those months without sleeping, but I did. It wasn’t an environment conducive to sleep even if I didn’t have a dream I was chasing. 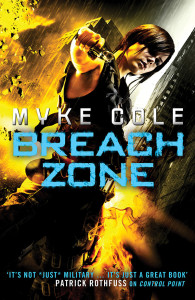 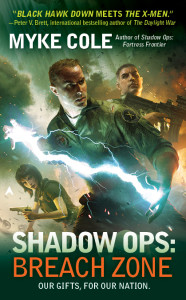 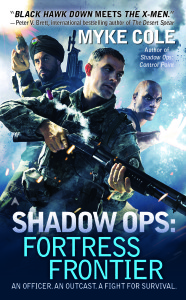 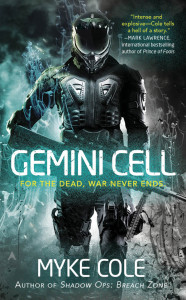