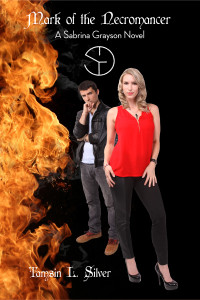 TS: First off, a HUGE thank you to SlipperyWords for having me on the blog! I’m extremely excited to be bringing a brand new series (The Sabrina Grayson Series) out and this book, I feel, is a better representation of my writing (and how intricate my brain is for world creation) and my strange imagination. Mark of the Necromancer is currently available for pre-order on my site and will roll out September first, just days before I attend Dragon Con to speak on panels and sell it in paperback for the first time as well. Note: It will be available on Smashwords.com in all E-copy formats and on Amazon in both print and e-copy.

SlipperyWords: I was there the day you read a bit from your manuscript at DragonCon. I remember telling you that you should continue writing it.  I believe John Hartness said, and I quote, “Keep writing that shit.”  What was it about that validation that helped you keep writing?

Tamsin: LOL! Yeah, John said that, and actually, yes…the comments that day by you, him, and a few others are the reason I kept it going. Interestingly enough, John Hartness also said to me, “You’re finally getting out of your own way.” That had a profound impact on me (though he doesn’t know that, well, until now I suppose? Ha!) and thus I kept working on it and made sure I stayed out of my own way (meaning, I didn’t go back and overthink if the style was right).

SlipperyWords: Will the next novel deal more with the concept of God and good vs. evil?

Tamsin: Yes, again! It’s no spoiler to say that Sabrina meets Lucifer in the first book (how she gets to him is one of my favorite scenes though…the 3 B’s make me laugh, I might be the only one, but that’s okay too…). So obviously I bring up God near the end of the first installation of the series. I did that because I do plan for us (Sabrina and I) to explore the idea of God in this world I’ve created in Book Two…which has a current working title of Cauchemar’s Charge. I have some ideas…but they won’t really solidify until I put the fingers to the keyboard and write it. But I do want to explore the idea of good vs. evil in the series and see where it takes me and how it affects my protagonist and her team. I mean, let’s be honest…it’s not like Sabrina can kill Lucifer or take away his power/hold on the Earth…so what would really equal a “win” for Sabrina and Alex? Only time will tell…

SlipperyWords: Will we get to know Lucifer more in the next book as well?  I really like the model for Lucifer on your book cover. Sheesh!

1) Yes! We’ll be seeing a lot more of Lucifer as time goes…in fact, by the 3rd book, he’ll very likely be on the cover with Sabrina (With or without Alex? You’ll have to wait and see…we’ve already taken the pics though and they are great!). So…have no fear, Lucifer is here to stay. LOL! (Who would’ve ever though I’d type that!?)

2) HA! Well, you’re not the only one. My graphics designer, myself, and others really like the model for Lucifer, too! I actually know him, Jason Griffith , from my previous life…as in back when I was neck deep in the theater world of NYC (I ran a company here in the city for six years or so and directed/designed for other companies as well during that time). I met him when I was directing a cabaret show in the West Village because he is really good friends with the producing team. In fact, a member of that team who’s been a great friend of mine since college at Winthrop University (Cedric Jones, who is also in my web series, Skye of the Damned as Vamp Detective, Ethan Vale) is who reminded me of Jason when I came to him for ideas to recast (originally Andrew Rogers, also in SKYE as Silas Winters, was going to model for it) Lucifer for the shoot.

What you might not know is that Jason is more well known for his work on Sonic the Hedgehog and other voiceover work…so the fact that I used him for just print is a bit different for him I think. I will say this, Jason is just one of the most genuine people you’ll ever meet and so easy to work with. I secretly hope I need to do more projects with him in the future! I think others do too, if feedback serves me correctly. 🙂

SlipperyWords: I sense there may be more to Katie than meets the eye. Any hints?

Tamsin: Katie? Well, she’s human and the plan for now is that she stay human, but A) I don’t always have control of what my characters become and B) if she stays human, that doesn’t mean she isn’t wicked important. I can tell you that currently she has no secret powers, unless you count being a good friend and an amazing cook/chef. She is very vital to the storyline because of multiple reasons, but none of them hinge upon anything supernatural. Now…Ginny on the other hand…I plan to really do some fun stuff with her masterful ghostiness (which isn’t a real word, but whatever). Not only that, but you’ve not seen the last of Fan-Chin or of a certain dress maker (or her butler), so hang tight…cause the world I plan to build will be diverse, complex, and suck you in like a whirlpool…but in a good way. 😉

SlipperyWords: You and I are both short. Did you choose a heroine with long legs just to imagine what it must be like?

Tamsin: LMAO! Is Sabrina tall because I wish to be tall? Nope! But Atlanta is tall because I always have wanted to be taller (she the heroine in my Windfire Series). Denika is short (she’s the heroine in Moon Over Manhattan, which will come out in the next year) but Sabrina is tall because I wanted someone who looked nothing like me. She’s blond, with golden brown eyes, blond hair, and wears heels. Though, on all the book covers her jewelry will rock…and that’s all mine. In fact, on the cover of book one she’s wearing a earing/necklace set made by a friend of mine. If you look at it and recognize what it is, you’ll see my silly little inside joke. You know, considering the title of the book and Sabrina’s title by the end of the book. I’m weird, what can I say?

SW:  We are all weird, Tamsin, in our own ways!  And congrats on the book.  For those keeping score, Tamsin is indeed a friend, so I acknowledge that ahead of time. I should also mention that I helped a little with the editing.  Having said all of that — I really do recommend the book.  It is a complex urban fantasy with some really cool new elements.  Get in on this series from the beginning.